Quinzinho (approx.1925-1950) was a dreaded and well-known young outcast in his day. Drauzio Varela, the doctor from the Carandiru Penitentiary who wrote a highly successful book which later became a film, mentions Quinzinho in his Estação Carandiru (SP, Cia. Das Letras, 1999, p. 270):

Mr Valdomiro is a mulatto with a creased face and gray patches on his frizzy hair… Seventy years and countless prison stories alongside legendary bandits such as Meneguetti, Quinzinho, Sete Dedos, Luz Vermelha, e Promessinha made Mr Valdo a respected man in the prison.

Leopoldina recounted (in a testimony to Nestor Capoeira, included in the film Mestre Leopoldina, the last good trickster (2005) how he met his first master, Joaquim Felix, or Quinzinho, around 1950; Leopoldina was about 18 years old and Quinzinho was maybe 23 years old.

Leopoldina: “I would look at him [Quinzinho], look at the guys around, and he would scream at me ‘Flip!’. When I prepared to attack, he would do these things with his body. I thought: ‘I’m going to kill him!’ Inside the Central Train Station, hidden under the tracks, I had an 8 inch knife that I used to hide there. At dawn I would take the knife and fall back into the night. So I left Quinzinho and went to Central Station to get that knife. At that moment, a newsboy I had never seen before, I think he is dead now, called Rosa Branca, asked me: ‘what is going on?’. He saw me very agitated and asked: ‘what is going on?’. I said, ‘Quinzinho stole my hat and I’ll give him a facada conversada’ (a stab in conversation)

Leopoldina explained what the facada conversada was:

The facada conversada is this: I’d have to wait for the moment when he was drinking, approach from behind, and tap his shoulder for him to turn around. When he turned I would stab him from the front, not the back. Because if I was arrested later this is how I would be thought of in jail: ‘This is a rascal, he gave the guy a facada conversada’. But if I stabbed him in the back, they would say, ‘Coward,’ and they would beat me.

Luckily for Leopoldina, White Rose calmed him down and he didn’t go looking for Quinzinho. Shortly after, Leopoldina was at a bus stop and found Quinzinho once again:

Leopoldina: “Mineiro Bate Pau, another guy named Peão, Testa de Ferro they also got off the bus, and then, Quinzinho. When I saw Quinzinho, I froze and thought, ‘This is it!’ But no one there knew what happened between us and they started talking to me. Quinzinho, seeing that I was respected and a friend of the rogues, approached me and said: ‘I don’t want trouble with you, because you’re also a trickster’. He was holding a cuíca and passed it to one of the guys. He went through his cuica and suddenly gave me a geral (searching someone for weapons)! Just imagine. He said, ‘I don’t want trouble with you because you’re a rascal, etcetera and all,’ and then gave me a geral! ”

The weeks go by and Leopoldina, who is eager to learn capoeira, is slowly working up to approaching Quinzinho:

Leopoldina: “I said, ‘Quinzinho, I want to ask you a favor’. ‘What?’ He replied suspiciously. ‘I want you to teach me capoeira’. ‘Then go to Morro da Favela tomorrow’. Gosh, I wouldn’t be so happy if someone gave me a million reais. That first day, I went back to Morro do São Carlos and went to sleep on a mat. The next day I could not get up. My whole body was hurting. And at the same time, I was worried that he wouldn’t want to teach me anymore. ‘How will I go?’ And in the Favela I still had to climb over a hundred steps. So I went the next day and said to Quinzinho: ‘I couldn’t come because I was hurt’. And he, without giving me any trouble said: “It’s okay, it’s okay”. And he started to teach me: ‘do it like this …. do it like that.’

“Then one day Juvenil appeared. He said hello, looked at me and said: ‘Let’s play?’ I looked at Quinzinho and as he said nothing, I said: ‘Let’s go’. Juvenil took off his hat, vest, tie, and stood naked from the waist up, and we started to play. But as soon as we started playing, he gave me a kick that grazed me on the head. Quinzinho was sitting with a 7.65 tucked into his waist. He was in shorts. At that time (approx. 1955) we wore football shorts and not the swimwear of today. Everyone wore shorts. And he had a handkerchief in his lap, hiding the pistol. When the Juvenil shot that kick, Quinzinho stood up and pointed the pistol in Juvenil’s face: ‘Don’t do that! Don’t do that, or he’ll become a coward!’ 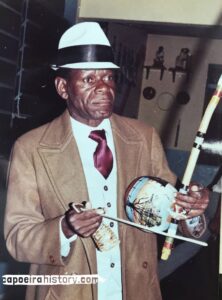 The outcast and the master

I find this story, told by Leopoldina, amazing. You see, Quinzinho was a dangerous young outcast, a gang leader. When the then young Leopoldina met him, around 1950, Quinzinho already had some deaths on his conscience and had already served time in the penal colony. We could think of Quinzinho as a kind of heir to the violent capoeira practiced by the carioca gangs in the 1800s.

Quinzinho didn’t really have a structured teaching method; as this method already existed in Bahia, with Mestre Bimba, since 1930; or with Sinhozinho, in Rio, in the same period. Leopoldina explained how Quinzinho taught: he was playing with the apprentice and saying, “Do it like this … Do it like this.” However, when he embodied the “capoeira master”, Quinzinho had an impeccable work ethic. Even more impeccable, because at that time, in Rio in the 1950s, students learned capoeira taking beatings to “get smart”. And even today, even if the teacher doesn’t hit apprentices (some do), it is common for more experienced (and / or stronger) students to beat beginners (and / or weaker ones).

I see this story as something very emblematic of the complexity of the capoeira world, with its bizarre paradoxes, which, in fact, do not seem so strange to those who have the body and the head shaped by the foundations of capoeira malice.

Mestre Leopoldina told me that Artur Emidio’s teaching method was based on sequences similar to those of Bimba, but performed to the sound of berimbau played at a fast pace.

At first, according to Leopoldina, it was Mestre Paraná who played the berimbau at Artur’s academy, another Bahian who became well-known in Rio and was the teacher of, among others, Mestre Mintirinha. Artur only started playing berimbau later on.

Artur, like every Mestre, worried about the continuation of his style. Around 1963, Leopoldina began to attend an informal circle of angoleiros, estevedores of the docks in the harbour, which was held in their backyards in the suburbs of Rio. Arhur complained that Leopoldina was getting “very slow,” letting himself be influenced by Angola when, according to Artur, Leopoldina should “impose his capoeira.”