The UK has a ‘free’ Radio and TV service provided by the British Broadcasting Corporation (BBC) which carries no advertisements.  It is funded by an annual licence, that the whole population is expected to pay for, and refusal can lead to a jail sentence.  At the time of writing this, the licence costs each household about £160.  The gaps between TV programmes are filled by trailers for other programmes and station Idents.  BBC One the channel with the largest audience, has Idents that showcase aspects of British Life.  Between 2001-2006 a suite of Idents featured adults doing physical activities, either sports or dance, including wheelchair dance, Tai Chi, aerial gymnastics, rugby football and capoeira.  Because BBC One has an audience of many millions, these ‘fillers’ are seen by many people.  The capoeira Ident, which can be seen online featured two young Brazilian men newly arrived in London, doing beautiful capoeira apparently on a London roof top with the dome of the St Paul’s cathedral as a background.

The two men, now both mestres (Mestre Poncianinho and Mestre Casquinha) were seen by many people over the five years their performance was broadcast.  There was no explanatory caption and no bateria (percussion).  Those who knew what capoeira was recognised it with delight.  I have spoken to puzzled viewers who described it as ‘Cuban’, ‘gymnastics’, or ‘acrobatics’.  Mestre Poncianinho used a still from the Ident on his advertising flyers for many years and it is reproduced in his book.

In 2020, during the Covid-19 pandemic the BBC have launched a new capoeira Ident, in a new series called One:  Oneness.  These all show people doing physical activities that in normal times are done in groups.  To represent the lockdown the screen shows 6-10 people practicing alone, but all in unison.  The capoeira Ident shows people in flats, gardens or the street doing meia luas and queixadas, in capoeira uniforms (abadás). https://cdob.co.uk/bbc-one-oneness-ident

When Mestres Poncianinho and Casquinha did their performance they were members of Cordão de Ouro.  The new Ident features current Cordão de Ouro people, drawn from Contra-Mestre Mascote’s group based in Birmingham, London and Leicester.  The reappearance of a capoeira Ident at the time of the Black Lives Matter movement is a good opportunity to revisit an attack on the BBC from 2002 centred on the Poncianinho and Casquinha Ident.

The right-wing newspapers in the UK regularly attack the BBC.  Their owners would like to have commercial TV and radio stations and make money from them.  The Murdoch family who own two newspapers, Fox News, and Sky TV, are particularly vocal about the BBC being run by London based liberal intellectuals who are anti-Christian, anti-family and therefore out of touch with ordinary British patriots.  The licence fee is attacked relentlessly in its own right, but also as something the liberal intelligentsia at the BBC ‘waste’ on left wing, highbrow, rubbish that no decent British family wants to watch but has to pay for.  The most extreme newspapers are The Daily Express and The Daily Mail which had big circulations (2-3 million readers) in 2001.  Both are reactionary, staunchly anti-intellectual, routinely support miracle ‘cures’ for cancer, and publish salacious gossips about ‘celebrities’.

In 2002 the capoeira Ident was used as a pretext for an attack on the BBC.  The Daily Mail has an opinion and gossip column under the by-line of a pseudonym ‘Ephraim Hardcastle’ whose stance is that of the sensible ‘man in the street’.  The Daily Mail is notoriously hostile to all women, so the column really does represent the assumed views of ‘the patriotic man’, with common sense, living outside London.  In that context it was not surprising that the Ephraim Hardcastle column used the capoeira Ident to attack the BBC.  The journalist wrote that the BBC was using white males to perform capoeira, explaining that it had been created by ‘Black slaves’, and was a martial art which incorporated dance.  Hardcastle then told his readers that by hiring white men to perform capoeira the BBC was presenting to the British public – the licence payers – a dishonest travesty.  The Ident was ‘a case of patronising liberals getting all excited about exotic culture and completely missing the point’ (3/3/2002).  Hardcastle did not make similar points about the Tai Chi, or the New Zealand Maori Haka (a war dance) or the Argentinian tango.  The BBC did not demand a public correction or make a public defence, but Hardcastle’s basic premise was wrong.  Mestres Poncianinho and Casquinha are both Brazilians who self-identify as mestizos.  Neither is very dark-skinned, but they are both proud of their Afro-Brazilian heritage and would not, in London, or Cyprus (where Casquinha now teaches) be classified as ‘white’.  Hardcastle cannot have asked Poncianinho or Casquinha how they self-identified or he would not have called them white.  The journalist erroneously assumed they were unauthentic capoeira players in order to attack the BBC.

Of course, even in 2002 Hardcastle’s sneering comment that ‘patronising liberals’ had ‘got all excited’ about ‘exotic culture’ and ‘completely missed the point’ was an odd set of complaints. Non Afro-Brazilians had been doing capoeira authentically for 60 years, and people of all races outside Brazil had been learning capoeira for 30 years paying great attention to the authenticity of what they learnt.  Two white Scottish women could have been filmed playing capoeira in the Orkney Islands and it would have been ‘authentic’.

Later on that decade the BBC filmed a travel series about Brazil starring Michael Palin, who was seen having a capoeira lesson from M. Gente Boa in Salvador, and the run up to the World Cup (2014) and the Rio Olympics (2016) included programmes in which British journalists saw capoeira.  These programmes were not ridiculed, perhaps because the Brazilian capoeira experts shown were all very dark-skinned Afro-Brazilians. 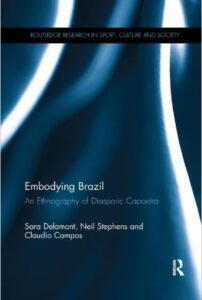 The One: Oneness Ident shows men and women with a variety of skin-tones practising basic moves to the sound of a berimbau. (https://cdob.co.uk/bbc-one-oneness-ident).

At a time when BLM campaigners have thrown a statue of a slave trader into Bristol harbour, and a popular historian has been sacked by two universities for talking about ‘damn Blacks’ in a recorded interview, it will be interesting to see if the anti-BBC press again seize on a capoeira Ident to attack the BBC. If any of the capoeiristas in the 2020 Ident were accused of being inauthentic, their teacher, Contra-Mestre Mascote, would be well placed to reject that accusation.  He is a British Sociology graduate, and could contest any such media slurs.  His own roots in capoeira are deep. I remember embracing Mestre Jogo de Dentro at Mascote’s first batizado and very wonderful it was.

I hope that this capoeira Ident leads to an explosion of new students enrolling for live classes as soon as the whole UK comes out of lockdown.

My colleague Professor Paul Bowman drew my attention to the Daily Mail piece for which I am grateful.

Sara Delamont is co-author of Embodying Brazil:  An Ethnography of Diasporic Capoeira  with Neil Stephens and Mestre Claudio Campos