The Origins of Capoeira?

The Angolan ancestry of a globalised martial art 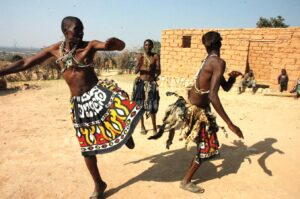 Capoeira has been linked to Angola since its very beginnings. Angolans were prominent among the enslaved Africans who played the game on the streets and squares of Rio de Janeiro, Salvador and other Brazilian port cities at the beginning of the nineteenth century. At that time, 80% of all enslaved Africans in Rio de Janeiro came from Central West Africa (territories of present-day Gabon, Angola and both Congos). Yet no specific African combat game of the past was consistently linked to capoeira until the 1960s, when the Luso-Angolan painter Albano Neves e Sousa came to Brazil. Watching capoeira at the academies of Mestres Bimba and Pastinha in Bahia he was strongly reminded of engolo, one of the combat games he had witnessed and depicted in Southern Angola in the 1950s. He described engolo as being performed in a circle, accompanied by hand clapping, during the celebration of efiko, the female initiation ritual.

Aiming to show through his art that Angola was the “mother” of Brazil, he argued that capoeira originated from this “zebra dance”. Two prominent Brazilians immediately embraced his idea: M Pastinha and Luís da Câmara Cascudo. Pastinha, the most prominent mestre of the traditionalist Angola style, was keen to give greater emphasis to the links between capoeira and its African roots. From that moment on his students – many of whom were themselves to become famous mestres – would be told his story of the zebra dance. The eminent folklorist Câmara Cascudo disseminated the information he got from Neves e Sousa in his writings, in particular the famous Dictionary of Brazilian Folklore.

The myth of engolo as the origin of capoeira became more familiar in the 1990s, when Brazilian identity politics made the lineage of the art, in particular its African roots, an important issue for many of its practitioners. The period following the centenary celebrations of the abolition of slavery, in 1988, saw an increased questioning of the significance of the 1888 general slave emancipation. The Black Movement downplayed 13th May as a “false abolition” that did not benefit the freedmen: the emancipated received neither any of the land they had been cultivating, nor education. During the post-emancipation Republic anything hinting of Africa was considered “barbarian” and was frequently the object of police repression. Hence the need to “decolonise” the perception of Africa in Brazil, valorising the links between them and rendering these more visible.

As Mestre Moraes remembers, in discussions of capoeira’s origins the engolo story provided a concrete African reference and reinforced the notion of its African-ness. At the same time, the importance of formative processes of capoeira around the Bay of All The Saints, within the broader context of Afro-Bahian culture, is emphasised by other mestres. The multiplicity of capoeira traditions is evidenced in the songs of Mestres Boca Rica and Felipe (extras 1 & 2), which express different views regarding where capoeira “came from”.

Like so many capoeiristas, Mestre Cobra Mansa and historian Matthias Röhrig Assunção dreamed of finding out more about the legendary zebra dance. Thanks to a small grant from the University of Essex they travelled to Angola in 2006. Their journey took them initially to Luanda, where Brazilian capoeira was already well established and musical bows commonly used in popular music. However, nobody seemed to know anything about engolo. With the support of local capoeiristas they went to Lubango in Huíla province and were introduced to kambangula, the fight with open hands already mentioned by Neves e Sousa. They needed to travel even further south on poor roads and dusty trails to find the holy grail of capoeira. In Mucope, the same village where Neves e Sousa had sketched the zebra dance fifty years earlier, they finally saw engolo being performed.

It took another four years to obtain funding from the British Arts and Humanities Research Council and to return to Angola twice (2010 and 2011), now accompanied by filmmaker Richard Pakleppa and ethnomusicologist Christine Dettmann. With the assistance of Angolan translators Angelina Lombe and Tchilulu Ntchongolola and other helpers, the team revisited the sites of the first journey, but also extended the research to other villages and communities in the region.

The research project aimed to document the musical instruments, dances and combat games of Southwest Angola, in particular of the Nyaneka and Nkhumbi peoples. The main outputs of the project are the documentary film Body Games. Capoeira & Ancestry and academic texts written by members of the team that are published or forthcoming.

More material from this research will be made available here soon