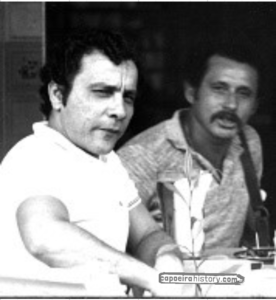 Capoeira as a socio-cultural phenomenon had a singular shape in Rio de Janeiro and was normally linked to survival and malandragem (vagrancy or rogueness). Repressed by the government during the nineteenth century, the Cariocan capoeira resisted, adapted itself like a chameleon, obeying good sense and ramifying in many lineages of groups, masters and students. Among these, one capoeira master stands out, a Vale-Tudo (Mixed Martial Arts) fighter, and a jiu-jitsu black belt, who distinguished himself with ginga, kicks and hard game in the capoeira rodas and those of life: the grand master Zé Pedro, leader of the legendary roda in Bonsucesso in the 1970s.

We start our narrative with an interview with Mestre Zé Pedro in the afternoon heat of the Olaria suburb of Rio de Janeiro. Born in the city of Santa Rita, in the Northeastern state of Paraíba, Mestre Zé Pedro arrived in Rio de Janeiro aged six, after losing his father. Destitute, he still managed to become literate aged eight, and got on with his life without never abandoning his studies, and always guided by the strength of his will to follow his path forwards. He enlisted in the Brazilian Navy as a sailor, having to lie about his age to be accepted, a way he found to survive.

He passed an examination to enter the Military Police of Rio de Janeiro (PMERJ) where he served as a soldier. He took a degree in Law after he reached the age of thirty, and specialised in combat, including a course at the Jungle War Instruction Centre (CIG) in Manaus, Amazonas state. In his military career he ended up promoted to Commander (Major), and was one of the founders of the special unit BOPE (Batalhão de Operações Especiais) of the PMERJ, a unit that became legendary and a reference for many.

M Zé Pedro claims that he never received any help from others through patronage or clientelism during his entire career, but developed thanks to his own struggle and merit. He nevertheless had a great friend at his side in the rodas of capoeira and of life, Paulo Sérgio da Silva, Master Paulão Muzenza, who always told him “we are not born to be soldiers, we have to move upwards”.

Assisted by his training in other combat modalities, M Zé Pedro participated in some Vale Tudo (precursor to Mixed Martial Arts) contests.  The Brazilian Jiu-Jitsu (BJJ) master Hélio Gracie awarded him with a black belt and said that he considered him a “golden boy”. According to Zé Pedro’s own account, he remained unbeaten in these MMA contests: “I never lost a fight in Vale Tudo”.

His initial contact with capoeira happened when he saw a group of capoeiristas practice at Mestre Valdo Santana’s academy, the brother of the famous fighter from Bahia, Waldemar Santana, trained in boxing, luta livre (free-style), jiu-jitsu and capoeira. Waldemar helped to disseminate combat sports in Brazil and is known for the longest fight in the history of Vale Tudo, with his former teacher Hélio Gracie.

He started training capoeira kicks and movements, later entering the academy of Mestre Mário Buscapé (Mario dos Santos), with whom he trained for three years, and learned, according to his teacher, capoeira with great facility, given his interest in sports.

In the academy of Mario Buscapé he met various well-known masters, such as Mestres Paulão Muzenz and Mintirinha. In this breeding-ground of tough guys, M Zé Pedro developed his skills with the berimbau, an instrument he is proud to play ver well – and became a singer with a profound knowledge of chulas and other capoeira songs. Zé Pedro pursued this path further, until becoming one of the main exponents of the “hard style” capoeira in Rio de Janeiro.

“When a guy tried to provoke, we made him fall a little bit”.

Mestre Zé Pedro opened his first own academy in the Rua Cândido Benício, in the Jacarepaguá neighbourhood, a space which he shared for some time with Mestre Mintirinha. It is here that he founded his first school, the group Pequenos Libertadores (Little freedom fighters), a name that brought him some trouble, as he had, in this period of military dictatorship, to explain to Secret Service (in this case the DOI-CODI), if the name was linked to some opposition or “resistance” to the military regime.  His story in the Bonsucesso neighbourhood began in the early 1970s when he started to teach capoeira in a venue located at the first floor (sobreloja) of the Rua Uranos, nº 497.Teaching initially was for the group called Filhos de Amaralina,  and included the realisation of rodas and shows.

The group changed his name to Guaiamus and Nagoas, in homage to two rival capoeira gangs that formerly existed in Rio de Janeiro. In this period Zé Pedro revealed that he enjoyed access to other capoeira groups, attended rodas all over the city, made friends, taught his students and supervised many rodas at this academy.

“I took over the academy, assuming all responsibilities, and organized the big rodas”.

And so the legendary roda of Mestre Zé Pedro in Bonsucesso was born. According to the master, the roda was attended by many good capoeiristas of the time and only tough guys managed to play. Asked about some game or special moment of the roda, the master replied: “The rodas, my friend, were excellent. I can’t enumerate them all. Like saying this one was best”.  However, he confirmed the attendance of capoeira masters such as Arthur Emídio, Leopoldina, Mintirinha, Paulão, Camisa (Camisa Roxa), Camisinha (Camisa), Touro, Dentinho, Gato, Paulinho Godoi, Celso, Peixinho, Itamar, Anzol, Silas, Corvinho, Amarelinho, and Garrinchinha.

“My academy became known because we had a contract with RioTour (official Tourism Board of Rio de Janeiro), so the name of my academy figured on the tourism events calendar  for the whole world”.

Hence the roda and academy of Zé Pedro became a core reference, and the capoeiristas from Brasília, São Paulo e Bahia came there to play. The venue at times also hosted them and became a reference for meeting friends.

The roda was usually led by one berimbau and happened on Sundas. The playing styles were very diverse, as the master always argued that “capoeira is capoeira”. There were games that were more flexible and malleable, or very quick, and those for kicking hard (“Pancada”), closer to his own style, the hard game, the close combat. The capoeiristas of the Bonsucesso roda played with malice and naturally rivalries emerged, for example, the one always mentioned between Mestres Paulão and Camisa. However, despite these hard games, M Zé Pedro points out, nobody became ennemy of the other, they were capoeiristas of the soul, and after the roda there always were the moments of confraternization.

M Zé Pedro had the capoeiristas Paulinho Guaiamum, Alfredo, Célio, Élcio, Valmir, Murilo and Luiz Peito Queimado as advanced students. In 1979, he followed a “call from life” and stopped teaching capoeira to study and pursue his career as a sergeant. But his legacy for capoeira remained in the annals of the history of Rio de Janeiro, and his contribution to capoeira is always remembered by the elder ones, who refer to his roda as a capoeira place of pure capoeira, technical, dexterity, agility, power and malice, a symbol of a generation of masters and practitioners from the Cariocan capoeira.

Based on an interview with M Zé Pedro by the authors and M Paulão Muzenza, 17 October 2018.