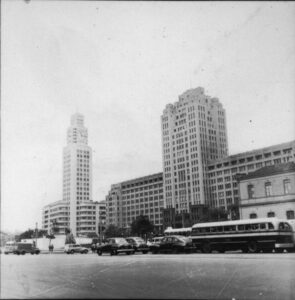 Capoeira, as many people know, was banned from Rio de Janeiro’s streets in the 1890s, resulting in arrests and deportations on a massive scale, and it only re-emerged in closed gyms from the 1930s onwards. Its spontaneous street practice, however, remained illegal, and was not really allowed until the 1980s. Our research project traces the development of modern styles in Rio during the period 1948–82. This “Contemporary capoeira” is documented in hundreds of newspaper articles, thousands of photographs and some video footage. Not one single record or picture, however, documents the capoeira roda that took place, 24 hours non-stop, during the four days and nights of Carnival, until 1981, between the glamourous official samba school parade’s site on the Avenida Presidente Vargas and the nearby Central Train Station, which links the city to its suburbs. This makes the testimony, in our film, of eight elderly masters and protagonists of the roda at the Central Station all the more precious.

Their memories document the kinds of rhythm and the tough and often violent games that were played in a volatile context of repression and clientelism. They remember the “tough guys” (bambas) that were key protagonists, such as M Mucungê, left. Black port workers were the main attendants initially, gradually substituted by a younger and more diverse generation, for whom playing their first game in the Central Station roda became the definitive rite of passage. The film combines the oral history of this iconic, yet so far undocumented, yearly performance with a 2020 re-enactment featuring Mário Buscapé, 85, still playing in the capoeira circle sixty years later. We also used some images from the present-day capoeira roda at Carnival lead by Mestre Ephrain, who struggles to maintain this tradition. It thus shows how oral history can rebalance the narrative of capoeira history, too often focussed on its official modality closer to gymnastics.

We hope you enjoy the video (click on CC for English subtitles) and if you have any record of the Central Station roda, get in touch!