The Nyaneka and the Nkhumbi, together with the Ovambo and the Herrero, live in the savannahs of Southwestern Angola – a very different habitat from the forests further to the north, home to the Mbundu and Bakongo. The traditional Nyaneka and Nkhumbi way of life consists of cattle herding with complementary agriculture. This agro-pastoralism has profoundly shaped Nyaneka and Nkhumbi cultures, including their rituals, weapons and combat games. Ceremonies such as the female initiation efiko, for example, include ritual sacrifice of cattle and the display of parts of the cow as adornment of the young woman-to-be. 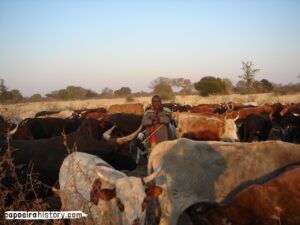 Pastoral lifestyle profoundly shaped Nyaneca-Humbe culture. The economy of the Humbes consists of the creation of cattle complemented with subsistence agriculture. The entire social life of the Humbe is directly linked to the management and raising of cattle (Ono ngombe), shaping not only the way of thinking about the economy but all the cultural processes that involve the community, ritual dances of initiation and death, marriage, betrayal and even legal disputes within the community, among others. (Cinézio Peçanha, 2019 p. 156) 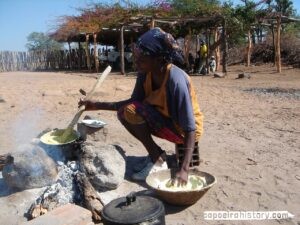 Because of the important overlap in vocabulary and customs, and relative small numbers of both groups today (together 4% of the Angolan population), they have been amalgamated by anthropologists and administrators into one single macro-group, the Nyaneka-Nkhumbi. In fact, each of the various subgroups (Handa, Mwila, Gambwe, Nkhumbi, etc) have their cultural particularities and strong ethnic identities.