The first radio broadcast in Brazil was aired in 1923 by Rádio Sociedade. Initially a luxury item, radio reached millions of Brazilians in the 1940s. Depending on the time of day, it could be listened to by 20 to 40 percent of the population. By the early 1960s, radio was part of the daily lives of Rio residents and only suffered heavy competition from colour television from 1972. It is at that stage that the journalist and capoeirista André Lacé created the first radio programme dedicated exclusively to capoeira, called “Rinha de Capoeira” (“Capoeira brawls”). It was initially broadcast by Radio Roquette Pinto on Wednesdays, from the 20th of January 1963.

Three Bahians joined the first episode. They were Mestre Artur Emídio, from Itabuna, the most famous and respected capoeirista in Rio at that time; Waldemar Santana, a well-known fighter who practiced capoeira as well as other martial arts; and Roland da Silva, one of Artur’s first students. Subsequently the program was aired on Sundays at 9:30 pm, with an average duration of 20 minutes. In addition to interviewing capoeiristas, André Lacé imparted knowledge about the traditions and history of capoeira. He also tried to do news reports on capoeira practice in Rio, gathering information in gyms, open rodas and baptisms. He did not invite only capoeiristas, but also Physical Education teachers such as Lamartine; or folklorists such as Edison Carneiro and Teresa Chiaravalotti (from Buenos Aires) to comment on capoeira from a sports, folklorist or ethnologist point of view. The program lasted until at least September 1963. We do not know why it was discontinued. 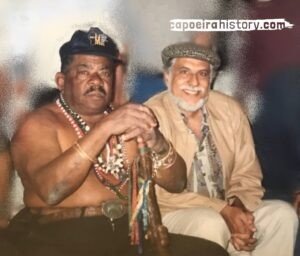 A second capoeira programme was broadcast in 1975, also created by André Lacé on the same station Radio Roquette Pinto. The name was now “Roda de Capoeira”. In this new segment André Lacé was able to interview many famous masters from Bahia and Rio. He invited Mestres Caiçara, Canjiquinha, Baiano da Bonfim, Moraes, Zé Pedro and many others to the programme. In addition to the in-studio interviews, the new format also included external recordings, for example, news reports and the coverage of capoeira “baptisms”. Just like a football game at Maracanã covered by sports reporter, André Lacé recorded the music of some rodas live, commenting on what was happening and interviewing practitioners on the spot.

We are grateful to André for making some episodes of his programme available for our project, as this is very rich material from the history of capoeira in Rio de Janeiro in the 1960s and 70s. With the help of communicator and multi-artist Patrícia Ferrer, we interviewed Lacé so that he could give us more information about each episode and remember the backstage stories of the recordings. The result is a six-episode podcast, each combining a current intro with an original recording. You can listen to them by clicking on the links below. Enjoy listening! Comments and clarifications are welcome. 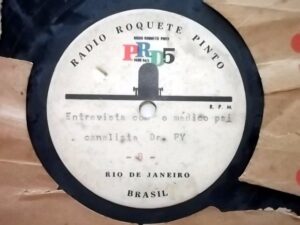 Radio Roquette Pinto label, with the PRD5 logo, used on the discs on which the programs were recorded (Source: RRP).

SCREENPLAY 00 – Information about the format of the “Capoeira History” Podcast. Testimony by André Lacé on his former programmes “Roda de Capoeira” and “Rinha de Capoeira” that were broadcast by Radio Roquette Pinto in Rio de Janeiro in the 60s and 70s.

EPISODE 1 – Conversation about and with Mestre Caiçara (Part I)

EPISODE 2 – Conversation about and with Mestre Caiçara (Part II).

EPISODE 3 – Conversation about and with Mestres Samuel Taets and Damionor Mendonça.

EPISODE 4 – Conversation about the Zé Pedro’s Roda which was held in the Bonsucesso neighbourhood (in the North Zone of Rio de Janeiro) with a life reportage of the roda, from 1975.

EPISODE 5 – Conversation about capoeira “baptism” at the River Club located in the Piedade neighbourhood (North Zone of Rio de Janeiro), with a life reportage of the event, from 1975.

EPISODE Bonus – Conversation about Mestre Canjiquinha in Rio, followed by the original interview from 1975