Class at the Capoeira project, University of Brasilia (UnB)

Since the beginning of the 20th century, historians have discussed whether the object of the discipline to which they dedicate themselves includes the facts that are contemporary to them and the historical processes they witness, the so-called present time. Much has already been written on the subject, including the interesting debate about the milestones to be used to separate the “present” from the “past”. It can be said that for a long time the reading of the cultural, economic, social and political processes underway were understood as the exclusive object of sciences such as sociology, anthropology, economics and political science, among other areas of knowledge and research.

On this interesting question, Eric Hobsbawm’s statement seems lucid and timely, highlighting the fact that it is in the present time that events take place that lead the historian to review the meaning of past events.1 In the case of Capoeira, an art-fight that arose from forms of an African matrix brought to Brazil by slaves, the 20th century was a period of intense transformation. For historians and social scientists, the recent trajectory of capoeiragem provides an impressive set of information that forms a kind of synthesis of cultural modernisation in Brazil, with all its marks of social inequality, intensity, miscegenation and appropriation and resignification of its codes by privileged groups.

It is with this look in mind that we have drawn up this essay based on personal experiences and references from recent history. The intention is to reflect on some of the many themes that feed the contemporary debate on capoeira in Brazil and in the world. If the following provocations, in a free and non systematic way, contribute to arousing critical thinking about the current dynamics of our art-fight, we consider our objective to be achieved.

If we take the 1990s as a reference, we can see interesting differences in relation to the current scenario of capoeira in Brazil and in the world. At that time, there was a great leap in the development of the art-fight, which expanded throughout Brazil and the world. In this expansion, it took on very distinctive aspects of a martial art. The history of capoeira teaches us that this search for sportive and martial objectives did not start then, in fact it permeates all the history of the art-fight in the 20th century. But at that time, in the 1990s, it seems that some thought it could become a complete fight, involving punching techniques and even grappling.

It was a period of much growth, but of many conflicts, because of what seems to me has been a new search for the sportive and martial identity of capoeira. Gradually this has changed, and most capoeiristas have become interested in the pedagogical and cultural dimensions of our art-fight. I would say that it was a phase that had problems, but that generated a great maturation in all of us, individually, and for capoeira as a cultural expression.

I believe that in today’s times, the master of Capoeira needs to seek constant improvement. The permanent technical and pedagogical updating of the teacher or master of Capoeira is necessary to deal with the issues that involve our sportive, cultural and pedagogical practice. Capoeira is very dynamic, and new information appears at every moment. The master becomes an important source of information for many of his students, especially to help them to filter this excess of information in these times of expansion of digital and technological resources.

Another important aspect is that, as some studies show, it is common for the capoeira mestre and the mestra to have a great role and influence in the formation of young people, pupils and students. Therefore, it is a craft that needs to be faced with great dedication and responsibility.

Rodas are held at the end of classes of the UnB Capoeira project, Master Luiz Renato.

Throughout its history, Capoeira has always suffered influences from other fights and martial arts. This is natural, even more so in the case of a modality that has as one of its main characteristics freedom of movement and improvisation. Many studies have been made about the influences of other fights on the development of capoeira in the beginning of the 20th century, for example in Rio de Janeiro or Bahia.

In Salvador and in other cities, capoeira disputed the spaces in the ring with other fights. As we know, Mestre Bimba himself and his students were excellent fighters in these spaces. On these occasions, Capoeira dialogued with other fights and, of course, had an influence.

According to some researchers, the very origin of capoeira can be a mixture of various cultural forms from Africa, brought by the enslaved, who merged and gave rise to capoeiragem as we understand it today. That is one side of the question. The other is that today we are much more concerned with the issues of ancestry and safeguarding our heritage.2

In this way, today capoeira makes a journey towards its past, and there is not much talk of innovating with mixtures with other modalities. On the contrary: now a discourse predominates that emphasises the search for a certain “purity”, which raises other very serious questions. But this is another matter.

In this scenario, we have the emergence of street rodas all over Brazil. A Brazilian tradition that is being rescued and – what is very interesting – at the same time spreading throughout the world. The street rodas are very rich opportunities of interaction for capoeiristas of all localities and social classes. In Brazil, and in many other countries, the street is not only a physical space: it is an environment of cultural exchange and construction of citizenship for many who do not have other spaces for living their culture. For decades, Brazilian anthropology has been formulating theories about the meaning of the street as a space of subversion of the hierarchy and resignification of cultural expressions. But the street is also the place to recover experiences and values that are lost with the characteristics of our civilisational process.

Thus, when a young person attends a street roda, he leaves the closed environment and has the opportunity to take a class on citizenship and respect for popular cultures. This is much more than a physical displacement, it is an act with numerous repercussions on the symbolic and behavioural level.

Of course, the street roda has its risks and requires the guidance of an experienced master or teacher, who establishes rules for a respectful coexistence. If there is respect, everyone wins and capoeira is the greatest winner. Fortunately, the street rodas are spaces that are getting stronger and stronger, and this experience of ours is expanding worldwide.

Rodas are held at the end of classes of the UnB Capoeira project, Master Luiz Renato.

After all, capoeira today represents a very complex and diverse scenario. In order to deal with the complexities that arise, it would be necessary to value the spaces for debate in capoeira in general, independently of group identities or other agendas

There are some initiatives in this direction, proposing a debate that goes beyond the limits of the group, valuing the culture of capoeira and the figure of the masters. It is necessary to value the autonomous organisation of capoeira, in which capoeiristas articulate themselves horizontally and spontaneously and find points of convergence and carry out common projects.

There is no doubt that there are many important actors in this process, including groups, brotherhoods, collectives, federations and other such entities. However, we do not think that some solutions are in line with the traditions of capoeira, which from time to time appear in our scenario, proposing the creation of centralised bodies making decision on the directions that the art-fight should take. Unfortunately, in this case, some segments of capoeira feed on our centralising tradition and on a conception that the change of the legal system can, by itself, bring about change in society.

Trying to resolve something through the creation of a new law when that needs to be done in a participatory and autonomous way does not seem to me the best solution.3 Of course, this does not fit in with the history of resistance in capoeira and is not consistent with the history of traditions of popular origin and of the African matrix the proposal to attribute to a particular body – a professional council or similar institution – the power to grant permission to exercise the office of capoeira teacher or master. This is a debate that is already quite old, coming from the 1990s, but which always resurfaces. 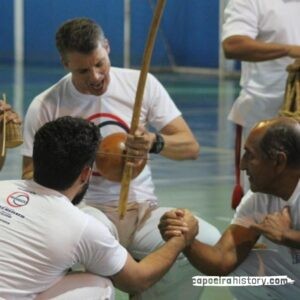 It seems very important to us to highlight that, in this world of so many novelties, what keeps us safe is the knowledge of our traditions. Those who seek knowledge of the past, of the stories of the masters, of the rodas, of the difficulties that capoeira has already faced are much better able to deal with the challenges of the present.

We should not necessarily see new approaches to capoeira, in technical, musical, pedagogical or aesthetic terms, as misrepresentations. However, when it comes to a cultural expression with a strong ancestral tradition, like capoeira, we have the obligation to always have the past and the struggles already undertaken as a reference. Therefore, it is fundamental to listen to the masters, to know their stories and to keep always alive the line of transmission of knowledge of our capoeiragem.

To reflect on these contemporary challenges of Capoeira, having ancestry as a reference, is to write its history of the present time.

2  The notion of ancestry has been used very frequently in works on capoeira and, in general, in academic studies and in other contexts related to Afro-Brazilian cultural expressions. In this brief essay, we understand ancestry as a category that prioritises symbolic elements that refer to a past of cultural resistance. A notion that relates the understanding and production of reality with references inherited from previous generations. It is, in this sense, an indicator of a certain reading of the past and a political commitment to confront the current struggles.

3  A few years ago, I decided to no longer take part in formal discussions on the subject of regulating the capoeira profession by means of law proposal, for personal and professional reasons. I believe I have already made my contribution in this field. I have been concentrating on the work of teaching capoeira, mainly the training of teachers, and in the research on our art-fight in the area of social sciences. I have had the opportunity to register some impressions on this subject in my book entitled Capoeira e as políticas de salvaguarda do patrimônio immaterial: legitimação e reconhecimento de uma manifestação cultural de origem popular (Capoeira and the politics of safeguarding the intangible heritage: legitimization and recognition of a cultural manifestation of popular origin, Coleção Conheça Mais, Fundação Cultural Palmares, Brasília, 2012).