Master Célio Gomes began capoeira around 1980 with mestre Poeira and his capoeira “godfather” was William Penninha.  It was however with another capoeirista, Muca, that he started doing his first rabo de arraia and he then continued practicing capoeira Angola with Mestre Manoel, at the time part of the GCAP group. In 1997 he started training with mestres Jurandir and Cobra Mansa and joined FICA. In 2007 he created his own group Aluandê. Since 2000 he has been teaching at Fundição Progresso, in the Lapa district. At that time there was already a street roda under the Lapa Arches, at midnight, led by Mestre Dimola. In 1995-96, Célio began to hold a roda in the same place, but much earler, at seven PM, thus taking advantage of this concentration of capoeiristas in the Lapa neighbourhood. After a pause he decided to restart this roda at the Lavradio fair, with the help of his group, contramestres Érida, Fagnon, treineis and students. Here it has been happening every first Saturday of the month for more than a decade. 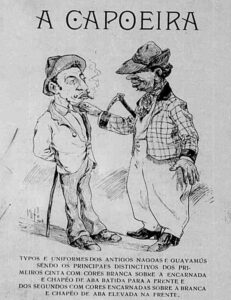 A Guaiamu and a Nagoa in Calixto’s view. Kosmos Magazine, March 1906.

To continue this roda is important for Célio because it maintains the tradition of the street rodas. In fact, Capoeira is present in the streets and squares of Lapa since the beginning of the art in Rio de Janeiro. During the Second Empire (1850-89) Lapa was dominated by a Capoeira gang called Espada, which lived in violent conflicts with the gang based around the church of Santa Rita. To better defend their territory and their people, they ended up federalising, and together with the Gloria gang and others, they became part of the notorious Guaiamus, immortalised in Calixto’s drawing with the hat brim up. In the twentieth century, Lapa was the territory of the most famous capoeira and tough guy, Madame Satã, and several other old malandros, such as Camisa Preta.

As Mestre Célio explains in the video documentary of the project, the energy of these old capoeiras is present when the berimbaus are touched on the Lavradio wheel.

To know more about capoeira gangs in Rio de Janeiro: