The city of Rio de Janeiro, for a long time, occupied only a small area of the current city centre, around the 15th November Square. In the 18th century, demographic growth and the expansion of economic activities made the city expand southwards, between the hills and the shore of Guanabara Bay. This growth often took place without investment in the necessary infrastructure. One of the most recurrent problems was the lack of drinking water supply and the flooding of several marshy areas. Faced with this scenario of interlinked problems, several landfills were made in order to improve the water supply. Still in the 18th century, an aqueduct was built to carry water from Desterro Hill (today Santa Teresa neighbourhood) to the Santo Antônio hill (levelled in the 1960s), to bring water to the fountain on Carioca Square, one of the main water supply points of the city. An enslaved labour force of indigenous and African people was used for the construction of the monumental Aqueduct of Carioca, 270 metres long, inaugurated in 1750. 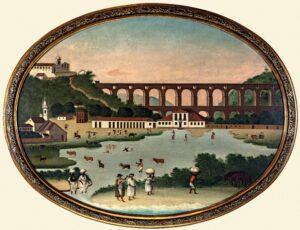 In 1751, on the land located between the beach and the Morro das Mangueiras, Father Ângelo Siqueira Ribeiro do Prado built a seminary and a chapel dedicated to Nossa Senhora da Lapa do Desterro. Therefore the square between the arches and the Boqueirão Lagoon (current Passeio Público) soon became known as Lapa. Although the lagoon was unhealthy, the region was frequented by many people who passed through and made various uses of it. The novelist Joaquim Manuel de Macedo in the novel “Dois Amores” (Two Loves) stated that the Largo da Lapa do Desterro was remarkable for “the huge crowd of people, and for the cars, buses and gondolas, which incessantly pass through it”. The celebrations in devotion to the Divine Holy Spirit there were always moved with “offerings” and “great fireworks”. In 1896, with the channelling of other rivers, the aqueduct was converted into a tramway viaduct which facilitated access from the centre to the neighbourhood of Santa Teresa.

The urban transformations in Rio de Janeiro between the middle of the 19th century and the beginning of the 20th century contributed to the emergence of Lapa as the core place of bohemian sociability. Linked to Largo do Rossio (now Tiradentes Square) by Lavradio street all this area was attracting restaurants, bars, nightclubs, guesthouses, cafe-concerts and clubs such as Clube dos Diários and Clube dos Políticos in Passeio street, frequented by literate elites that animated the nights with their events. 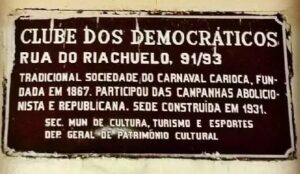 Still a survivor, the Clube dos Democrático maintains its headquarters in the neighborhood of Lapa.

The neighbourhood also housed the Carnival Club of the Democrats in Riachuelo street, and more popular public dancing venues which were constantly denounced in the newspapers for supposedly gathering in their halls capoeira gangs and other vagrants to dance maxixe.

According to Olavo de Barros, Lapa became a “favorite stronghold” of artists, poets, beggars, rogues, gigolos and prostitutes who not only passed through there, but also resided there, allowing the coexistence of various social actors. Many well-known artists in their time were associated with Lapa, and some of them are illustrious to this day, such as Lima Barreto, Vila Lobos and João do Rio. But this bohemian image of Lapa is also associated with the underworld of malandros (rogues), usually represented by black characters who circulated there. The most known of them is João Francisco dos Santos, better known as Madame Satã who for years lived and worked in the outskirts of Lapa, when he was not imprisoned in Ilha Grande.

From the 1980s on, Lapa underwent modernisation and remodelling projects. Today the neighbourhood concentrates a large number of show houses and moves the Carioca nightlife.

The capoeira roda in Lavradio street, coordinated by Mestre Célio and the Aluandê group, seeks to give more visibility to this historical tradition of malandragem in Lapa.