One of the most famous capoeira events in Rio de Janeiro, during the 1970s, was the roda at Zé Pedro’s academy. José Pedro da Silva was, at the time, still a soldier in the Military Police of the Federal District, and from 1975 onwards, of the Rio de Janeiro State (PMERJ). He participated in freestyle fighting contests (luta livre) broadcasted by TV Continental (Canal 9, which existed until 1972). He learned capoeira from Mário Buscapé, the leader of the Capoeiras do Bonfim group. Yet he also was a good friend of another Bahian master, Artur Emídio, which whom he even shared the space of his academy, in rua Uranos, 497, in Bonsucesso.

According to Mestre Paulão Muzenza, who played in the roda at the time, “Mestre Zé Pedro was a freestyle combat and jiu-jitsu teacher, but his passion was capoeira. […] Mestre Zé Pedro played a highly bellicose capoeira.” At the same time, he was an excellent berimbau player and had, according to Mestre André Lacé, a strong personality. All these characteristics allowed him to lead this capoeira roda which took place every Sunday, starting at ten o’clock, and which quickly became a key reference in Rio de Janeiro’s capoeira. As Mestre Valdir Sales, another participant of the roda stated: “His roda only had bambas, tough guys.” The most famous capoeiristas of that time in Rio de Janeiro came to play in Zé Pedro’s roda: Artur Emídio, Paulo Gomes, Mintirinha, Khorvo, Luis Malhado, Macaco Preto, Nilson Arerê, Paulão Muzenza, Moraes, Gato, Camisa, Celso, Touro and some others. Games were hard, meaning that kicks and headbutts were carried out with full contact. To the point that rather unexperienced capoeiristas would go just to watch the bambas play, or as Mestre Cobra Mansa remembers, only enter the roda at the very beginning or the very end. We do not have, however, any news of real fights taking place because everybody respected the masters in attendance. Zé Pedro’s roda took place regularly between 1973 and 1979, when its organiser decided to dedicate himself entirely to his career in the PMERJ.

André Lacé made a broadcast for Radio Roquette Pinto in 1975, where he not only documented the musicality of the roda, but also interviewed some of its participants. You can hear the original 1975 audio, after our interview with André Lacé, in this podcast. 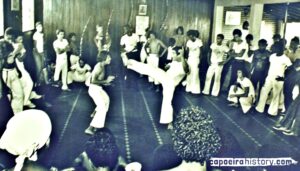 The Roda at Zé Pedro’s at the Bonsucesso academy.