I was in my first year of UFRJ (Federal University of Rio de Janeiro) School of Engineering, in the distant (in relation to Copacabana, where I lived with my parents and brothers) Ilha do Fundão. One day, I was in the schoolyard talking to some friends when I saw a man on the road pedalling at full speed.

As I approached, I began to notice the details of the figure’s clothing: a short-brimmed hoodie worn by sambistas; a red vest with white polka dots, completely open over his bare chest, which swayed in the wind like a bird’s wings; striped pistachio green and gray bell-bottoms and a wide black leather belt with a huge buckle at the waist; 3-cm-high platform soles, studded with silver stars.

He entered the courtyard at full speed and then skid, spinning, ended up standing beside a pillar, where he calmly left the bicycle after jumping. Then I noticed something even stranger: he was carrying, between his lips, a kind of twig painted black, red and white, about 30 or 40 centimetres long. Suddenly, the twig began to move and wrapped itself around the strange person’s neck: Leopoldina raised snakes at home, and this one – a milk snake – was one of his favourites.

I asked a friend, “Wow, who is this guy?” He replied: “It’s Master Leopoldina. He teaches capoeira in Athletics”- which was the sporting part of the student directories. “He comes by bicycle from Cidade de Deus to Fundão Island. It’s far…”- completed this friend of mine.

Demerval Lopes de Lacerda (1933-2007), the master Leopoldina, was born in Rio de Janeiro on a carnival Saturday. He was raised by his mother, and later by aunts and other ladies who took him in. When he was still a child, he ran away from home to sell bullets to other kids who dominated the railway lines of the Central Railway of Brazil, which joins the city centre with the more distant suburbs of Rio. It was in Central Brazil that he graduated and made after degree in trickster, approximately in 1950.

As a teenager, and in a time of great poverty, he went of his own accord to SAM (Serviço de Assistência ao Menor) – a dreaded Child Care Service. Leopoldina had no complaints from his time there; on the contrary, as a young street rogue, he soon joined the “directors” team. He learned to swim, among other things, regularly circling the island where the institution was located, which left him in excellent physical shape.

When he left SAM, already eighteen years old in 1951, and too old to sell candy and peanuts on trains, he began selling newspapers and soon set up a team. For the first time, he began earning money, dressing in expensive clothing and visiting the Zona do Mangue brothels, where he encountered fame due to the size of his penis. Leopoldina frequented prostitutes, often more than once per day, without wearing any protection, and somehow never contracted any venereal disease. 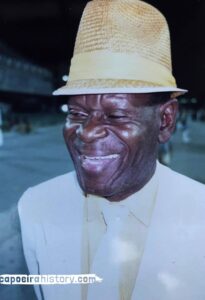 It was at this time that he met Quinzinho, or Joaquim Felix, a dangerous young delinquent and gang leader, who had already served time in the Penal Colony and had a few deaths on his conscience. Quinzinho was a capoeirista and was Leopoldina’s first master in the art of “tiririca”, the capoeira without berimbau of the carioca reprobates, descended from the capoeira of gangs of the 1800s.

A few years later, Quinzinho was once again arrested and this time murdered in prison. Leopoldina disappeared from the area due to fear of reprisals from delinquent enemies. When he returned to the streets, he met Artur Emídio, recently arrived from Itabuna, Bahia. He became Artur’s student around 1954, knowing then the Bahian capoeira was played to the berimbau.

Later, Leopoldina went to work at Cais do Porto and eventually managed to join Resistência, one of the dock branches. He retired early – before the age of forty-five, due to a work accident (which fortunately left no consequences) and lived the life of a capoeirista and high-spirited trickster more intensely.

Another important aspect of Leopoldina’s life was his relationship with samba. He went out with Mangueira for the first time at the 1961 Carnival at the age of twenty-eight. Mangueira was the first samba school to include capoeira in its parades, which gave capoeira great visibility. Leopoldina even organized a group of sixty capoeiristas to demonstrate the artform in the V.C. Entende wing, the show hall of Mangueira. He kept his partnership going with Mangueira until about 1974.

I myself paraded several times in Mangueira when I was still a capoeira novice, at the invitation of Leopoldina, around 1968/1970.

The documentary ‘Mestre Leopoldina – The Last Good Trickster’ brings an interview Leoopoldina gave to Nestor Capoeira. You can see here the first part: