Both Carnival and capoeira have a long history in Rio de Janeiro; this includes a number of quite different periods, since the colonial times of the “slave capoeira” and the entrudo celebrations up to the present.

The abilities of capoeiras qualified them to perform as solo dancers in the carnival parades of the samba schools created in the 1930s. A significant number of them (how many hasn’t been researched until now) even paraded in the key role of “mestre-sala”, the male dancer accompanying the female “porta-estandarte” holding the banner of the school. As M Camisa highlights in an interview, “the mestre-sala always was a capoeira who defended the porta-estandarte”. And this already happened since the period in which small carnival associations informally paraded through the streets and capoeiras accompanied and protected the banner of their association. 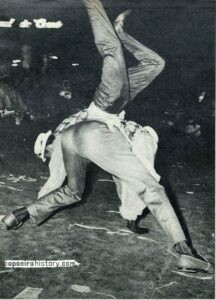 During the 1960s, the percussionists of the “bateria”(percussive orchestra) of some samba schools also started to use acrobatic movements of capoeira in their parades. According to the journalist Carlos Leonam, “Mangueira’s bateria performed with capoeira steps”. The article is accompanied by a photo showing two percussionists playing capoeira.

According to all the information we have, Mangueira was the first Samba School to introduce capoeira in its parade, in 1961. In 1965 a journalist from O Jornal asserted:

“The group ‘Mestre Leopoldina’ was the first to exhibit showcase in a Samba School. This was in 1961 and “Mangueira” had the idea to exhibit among its dancers a group of authentic capoeiristas. The success was so outstanding that the School repeated it for its carnival parade in 1962 and the year after that as well”.

In its ground-breaking parade of 1961, Mangueira performed the theme “Reminiscences of the Old Rio de Janeiro” and won the competition. This innovation in the choreography of the parade is associated with Mestre Leopoldina, an important character in the Cariocan capoeira, who represents, better than no one, the link between the old malandros and the modern capoeira recently introduced by the Bahians to Rio de Janeiro.

Regarding the participation of capoeira in the Mangueira parade we have the testimony of M Vilmar:

“Until the age of eighteen I had never seen capoeira in a samba school, and when Xangô da Mangueira arrived there at the IAPC, I did not know him. He spoke to Leopoldina to get three or four people to parade in an ala [“wing” or a section of dancers in the parade] of Mangueira, at a time when samba schools did not allow people from outside [not members of the school] to parade. Leopoldina asked if we wanted and we accepted, because the theme of the parade was ‘Old Rio’, a name which later I gave to my group because I thought it was outstanding. […] Xangô arrived there, he already was famous at Mangueira, it was us who did not know him, and Leopoldina was the most well-known capoeira because of his great charisma. He enchanted people. Leopoldina took me and three others from Djalma’s group and another two friends of his. At this time the parade of the samba schools happened on the President Vargas avenue, from the Central Brazil Station until the Candelária church. They gave us costumes they had paid for. They paid us to parade in a samba school. My friends became very jealous! A little black boy from the Olaria neighbourhood, to wear a costume of Mangueira! My mother was very proud! In a small neighbourhood it’s like that”.

So Mangueira became the first samba school to have a “wing” of capoeiristas, who paraded playing capoeira. Mestre Polaco remembers that some adaptations were necessary because the instruments could not stand still, as in a normal capoeira roda:

[…] “when we paraded in Mangueira in [19]68 we had to take an atabaque drum, right? A huge atabaque. And Paraná made a little cart. You know this thing you use today to put the atabaque inside, so that the atabaque doesn’t keep balancing? He did something like that, but from iron and three small wheels [..]. As you kept walking, you pushed it and played the atabaque”.

Anyway, the bateria (percussion orchestra) of the school did not stop during the parade, so that provided a rhythmic base for the capoeira game. Mestre Paulão remembers: “We played [capoeira] also to the samba rhythm. We opened the roda and it worked. The bateria playing normally. The rhythm played out without any problem. A number of other samba schools incorporated capoeira in their parades. 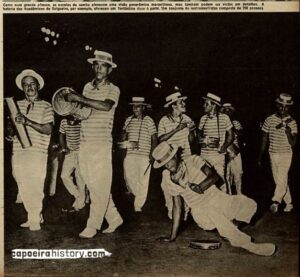 Detail, the bateria of Acadêmicos do Salgueiro “put on a show” in this photo from Revista Manchete, from 03/13/1964. Source: Source: National Library Hemeroteca

At Salgueiro, for example, capoeira also fitted in well. This association started to parade on the avenue with storylines that thematised the history and culture of Afro-descendants in Brazil. An example of this is the plot Chico Rei, from 1964. According to the Correio da Manhã, this school paid homage to Chico Rei, “the chief of an African tribe, who was captured with various of his men by slave traders and taken to Brazil”. The bateria of the School consisted of three hundred percussionists, and some would play berimbau for a “capoeira dance, also included within the theme and plot”. The Manchete magazine published a photo of the Salgueiro bateria , with one percussionist holding a pandeiro and performing a capoeira movement known as “corta-capim” (grass-cutter).

Other themes that included capoeira were paraded by Salgueiro in 1968 (A Bahian night) and 1969 (Bahia of all Gods). In fact, Salgueiro had a dedicated capoeira group for parades, called the wing (ala) King of Gold. The great success of these sambas at the parade during these two carnival seasons resulted in that wing continuing to make capoeira exhibitions, disseminating the art among the inhabitants of Rio and contributing to its greater social acceptance.

The samba school Império Serrano also seems to have had a capoeira ala, which rehearsed in the headquarters (quadra) of the association. As to the group of Mestre Paraná, called “Folkloric Group São Bento Pequeno”, they paraded also for Imperatiz Leopoldinense in 1967, as noticed by the Correio da Manhã, before parading for Mangueira. The theme of the school’s parade was The Poetic Life of Olavo Bilac, and one of the attractions was to bring the capoeira group São Bento Pequeno to the avenue. 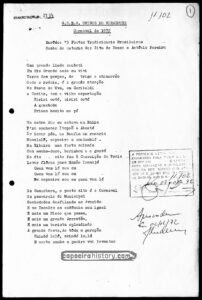 Hence many capoeiristas ended up parading for the various samba schools or blocos (smaller carnival associations). Mestre Camisa, for example, who did live on the Mangueira hill and paraded for that school, also paraded for Portela, São Carlos and Canário das Laranjeiras. In this context it is interesting to note that most plots that “demanded” capoeira were related to Bahia. This was the case for Mangueira as well as the other schools. Vila Isabel and Salgueira also mentioned capoeira explicitly in the songs of their parade themes. Salgueiro became champion in the year the school’s song mentioned a capoeirista who hang out at the hillside of the Bonfim Church, in Salvador, Bahia. The inclusion of a capoeira corrido in the song was so successful that the whole city of Rio de Janeiro was repeating its refrain: “Zum, zum, zum,/ Zum, zum, zum,/ Capoeira mata um” (Zum, zum, zum, capoeira kills someone). Capoeira continued to be present in samba school parades during the 1970s and 1980s.

The success of capoeira in the carnival resulted in capoeira exhibitions outside of the parades during the year. The association with Bahia was always present, and that is how capoeira became firmly rooted in Rio de Janeiro’s carnival parades. As a commentator remarked: “Capoeira is fashionable in our samba schools and blocos”.

This text is a summary by Juliana Pereira of the article “Ginga na Avenida”, which contains all the references to the interviews and newspaper articles cited here.