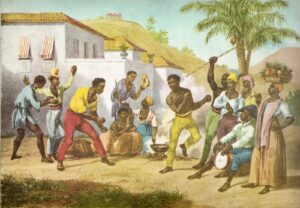 Capoeira rodas are documented in the streets of Rio de Janeiro since the famous engraving ‘Jogar Capoera’, based on a drawing by Johan Moritz Rugendas, and published in 1835. Capoeira disappeared from the streets after the systematic repression at the beginning of the Republic (1889–90) but reappeared after the end of the Vargas dictatorship in 1945. Among the thousands of Bahian and other Northeastern migrants who came to work in Rio de Janeiro, some were capoeiras. In the 1950s, 1960s and 1970s various street rodas took place in the city, with both Bahians and Cariocans (inhabitants of Rio de Janeiro) participating. Some of the latter were old malandros, others already students of the Bahians. The most famous street rodas were those in Quinta da Boa Vista, the carnival roda at Central Station and the roda at the Our Lady of Penha festivities. In this way, the street rodas contributed to the emergence of the contemporary styles of capoeira.

With the growth of academies and organised groups practising a sportified capoeira, the street rodas lost their importance from the 1970s onwards. Only the Caxias Roda from that time continues today. We are trying to rescue the history of the street rodas in Rio de Janeiro. If you have material about rodas before 1984, and would like to share it, please get in touch through the email capoeirahistory and add gmail.com