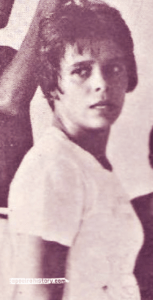 Sandra Eugênia Feitosa was born in 1959 and grew up in the slum located on the Pavãozinho hill, at the end of the famous Copacabana beach in Rio de Janeiro. The only information we could obtain about her childhood is that she went to the São Pedro do Pavãozinho primary school. When she was eight years old, she was recruited by the women from a conservative Christian movement called CAMDE (Campanha da Mulher pela Democracia). These “Candocas”, as they were nicknamed, sought to build up support in lower class communities, initially to overthrow the Goulart government, and after the military coup in 1964, to mobilize support for the military regime. Sandra received from the CAMDE “Shoe bank” a pair of shoes fabricated by the army and sold for a symbolic price, to fight worm infestation and instil a sense of responsibility in the child. Sandra had to commit herself to “not sell them, exchange them or throw them away”.

Sandra started training capoeira in Mestre Roque’s group when she was ten years old. In the 1970s she already taught capoeira in the group “Bantus de Capoeira”, on the same Pavãozinho hill. She lived there in a small room with her mother and a nephew when she received the visit of a Taekwon-Do master, Woo-Jae Lee, in 1979.

Master Woo-Jae Lee was impressed by her skills, to the point that his visit resulted in an article in the martial arts magazine Dô. Sandra explained to the master: “At the time I started to practice capoeira, I was the only woman in the academy and this inhibited me a bit. But today capoeira means everything for me. Sport, fight, folkloric dance and show.” Sandrinha also talked about the “muscular memory”, and how the body, like capoeira, can become an “instrument of death”.

At this stage she was already doing shows in Rio. She started with the Sabata group, in the Riachuelo street and played a role in the show “A night in Bahia”. She also participated in shows in Salvador, Bahia, with the group Filhos de Obá, at the Maré Cheia venue. According to the magazine Dô, she would have been graduated as well by Mestre Caiçara.

Her teacher, Mestre Roque, who is very proud to have taught her capoeira, told us the following about Sandrinha:

Children, girls, I was always lucky with girls. I graduated the first capoeira mestra in Brazil. It hurts me to remember… she is there in the picture (shows the photograph of his academy). Sandrinha. She was there. She was this small…, blond with blue eyes, she was beautiful! She entered the academy, she took care of the boys. […] She was a civil servant. She is in Brasília now.

Mestre Lapinha, a student of Roque who also knew Sandrinha, describes her as follows:

This Sandrinha… she played a lot. Nobody could challenge her, no. Nobody would dare to provoke her, you understand? […] He [Mestre Roque] loved her. He treated her like she was his daughter. And he incorporated capoeira into this woman. So much so that she is a civil guard. She worked as an instructor in the civil guard. People knew her, knew that she was good at giving a beating, personal defence, this Sandrinha. But she was like a bulldog. She played a lot, you understand? She was good at capoeira. It was very difficult for someone to have a go at her. She was like this type of woman that existed in Bahia. What was her name?….. [Maria] Doze Homens [=Twelve Men].

When Sandra became an adult, she went to the Public Service School in Rio de Janeiro, where she passed the entry examination, in 1977, to become a prison guard. She worked for many years at the Frei Caneca prison, in the Centre of Rio de Janeiro, until moving, according to many people who knew her, to Brasília at an unknown date and continue her career there. In 1991, due to years of service and merit, she was promoted to the “C Class” of her profession.

With her move to Brasília, the Cariocan capoeira lost its first female master. We also have no more news about her. If someone could give us more information or has her contact details, that would be very much appreciated. Then get in touch with capoeirahistory.com. We believe it is very important to rescue the history of the first capoeira mestra from Rio de Janeiro!

“Mestra Sandrinha. A mulher na roda de capoeira”. Dô. Revista de Artes Marciais, no. 10 (1979), p. 22-25. We are grateful to Mestre Paulão Kikongo and the research group Almanaque CapoeiraGens for sharing the article of this magazine.