Oswaldo Lisboa dos Santos, Master Paraná, was born in 1922, in Salvador, Bahia. According to the testimonies of his former students, he learned capoeira in Bahia with Antônio Corró. Paraná moved to Rio de Janeiro in 1944, when he was only 22 years old. He was one of the first Bahian capoeiristas to establish themselves in the city. In Rio de Janeiro he got work at the Pensions and Assistance Institute for public servants of Rio de Janeiro state (Instituto de Pensões e Assistência aos Servidores do Estado – IPASE). He lived in the Bonsucesso neighbourhood, in the northern zone of Rio de Janeiro and started to teach capoeira in his backyard in the 1950s. M Paraná received many children in his backyard, and the role of his wife, Maura Bastos, known as Aunt Maura, was fundamental here as she received and cared for the youngsters. 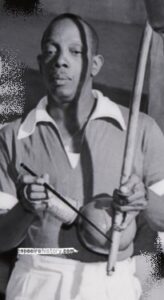 In the capoeira universe Paraná became known mainly because he was an excellent berimbau player. A carpenter by profession and training, he carefully manufactured his berimbaus himself using coated strings and varnished wood. His great ability as a musician allowed him to record, in 1963, a single record with four tracks with the CBS company, called “Capoeira – Mestre Paraná”. He was also often asked to play berimbau in other academies, for instance at the roda of M Artur Emídio.

Enjoy and read here the text of Juan Diego Díaz on the musical heritage of M. Paraná.

In 1956, according to M Polaco, he founded the Conjunto Folclórico de Capoeira São Bento Pequeno. The group presented itself at various types of shows, disseminating Afro-Brazilian culture in “Bahian Nights” organized by social clubs and carnival schools, parades of carnival groups and theatre plays such as the piece O Pagador de Promessas by Dias Gomes in Rio de Janeiro in1962, together with the capoeirista Joel Lourenço do Espírito Santo. Mestre Paraná also collaborated with the black dancer Mercedes Baptista participating in shows and festivals such as the “IV Festival Folclórico do Distrito Federal”.

Paraná died in 1972, at the age of 49, victim of a heart attack. His ability and talent playing berimbau is always highlighted by masters who had the opportunity to meet him. His trajectory, even though brief, left an important heritage in the history of contemporary capoeira and today various masters and groups claim him heritage.

In the following video you can find out more about M. Paraná and his berimbau: